The 10/40 Window is home to some of the largest unreached people groups in the world, between 10 and 40 degrees north of the equator in the Eastern Hemisphere.

How does VMMissions direct the missional energy of the church towards those who have not yet heard?

With a fan whirring lazily from the ceiling, Michael and Ruthy gathered to pray with their teammates around the map of the South Asian city that was spread out on the table in front of them.

After several years of learning language and culture in another city where they were the first Westerners their neighbors had ever seen, God had prompted them to relocate to this even larger city, where some of the world’s dirtiest air blanketed its 20 million inhabitants. Even though the city’s population was only 15% Muslim, Michael and Ruthy knew this to be the historic heart and center of Islam in South Asia. They were also very aware of the vast cultural divide limiting the witness of Hindu background Christians among their Muslim neighbors.

“Can our being here—praying, inviting others to pray with us—help to spark movement to Jesus among the four to five million Muslims in this city, the 45 million in this state, let alone the broader region?” Michael and Ruthy asked God for further direction: “Where should we live?” 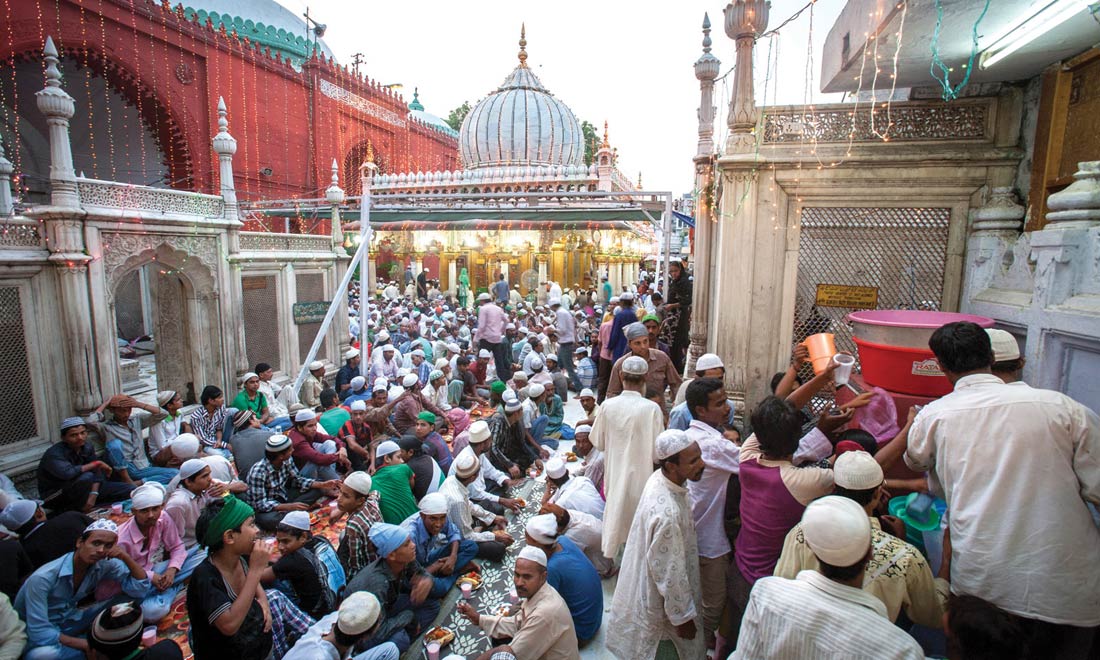 Living in a guesthouse for Muslim pilgrims immediately adjacent to a shrine, Michael and Ruthy prayed from their rooftop for Jesus to be revealed to those gathered. Photo courtesy of Michael

What brought Michael and Ruthy to this place? And why would VMMissions want to help support them, when another agency was already providing direction? Indeed, why the proliferation of new workers to new—often unnamed places—where VMMissions has had no historic involvement and no direct invitation to come?

The answer has to do with a paradigm shift in the world of Christian mission. William Carey helped the church reclaim the Great Commission in the early 1800s, launching what is called the first era of modern missions. Another radical change has emerged in the last fifty years. Thanks to influential missiologists like Cameron Townsend, founder of Wycliffe, and Ralph Winter, founder of the U.S. Center for World Mission (USCWM), there has been an awakening to the cultural “boundaries” that can prevent the gospel from spreading spontaneously from one “people group” to another.

In other words, the gospel will not naturally spread across some cultural boundaries. Instead, it will take intentional effort to engage the half of the world’s population hidden within what have been called “unreached people groups.” If the church is to realize the biblical vision of people from every distinct tongue, tribe, and nation worshiping before the throne of the Lamb (Rev. 7:9), new approaches, agencies, priorities, and partnerships are needed.

Michael grew up in the Shenandoah Valley of Virginia. After spending a year with a mission team in Nepal, Michael decided to give his life to something more than baseball. In his team leader, Ruthy, he also found the partner who would eventually join him in that missional adventure.

When Michael returned to the U.S., Skip Tobin (my husband) encouraged him to sharpen his missional vision by taking a course called Perspectives on the World Christian Movement. After all, the course, developed by Winter’s USCWM, had radically changed the trajectory of our lives back in the late 1980s. It opened our eyes to the fact that most of the church’s resources spin around those who already have access to the gospel. In light of these realities, we concluded that we would need a call to stay as much as a call to go. We spent the next twenty years devoted to seeing church emerge among the unreached Isaan people of Northeast Thailand.

Michael signed up for Perspectives. For 15 weeks straight, Michael drove to Fredericksburg, Virginia, where the course was being offered. He conveyed his enthusiasm to Gloria Lehman, the woman who most closely filled the gap left by the mother he had lost to cancer. Soon, Gloria, a VMMissions staff person, took the course as well, this time in Chantilly, Virginia. It made such an impact that she resolved to bring the course to Harrisonburg, Virginia, where VMMissions is headquartered. VMMissions has had a key role in offering the class a total of eight times. As a result, Perspectives has informed the missional understandings of many workers, staff members, Ministry Support Team members, and church leaders in the surrounding community.

Back to Michael and Ruthy. Now married and serving a population underreached by the gospel, would God direct them to where they should live? While praying together as a team, some of the children included, they received a detailed picture of the very street, building and doorway of what would be the home base for their team for the next four years.

Amazingly enough, that home was owned by the imam of a highly esteemed Muslim shrine and pilgrimage destination. Day after day, streams of supplicants crowded its small courtyard, visible from Michael and Ruthy’s rooftop prayer station. They regularly prayed with and for those needy supplicants who lined the narrow alleyways just outside their back door. They grew to know, love, and serve their neighbors and were known, loved, and served in return. They worked at developing Muslim-accessible Bible stories and worship materials. They organized prayer events throughout the city and region. Though no longer present in that city, Michael and Ruthy keep their eyes fixed on a hope that remains unrealized: a movement of Muslim background believers multiplying across South Asia. 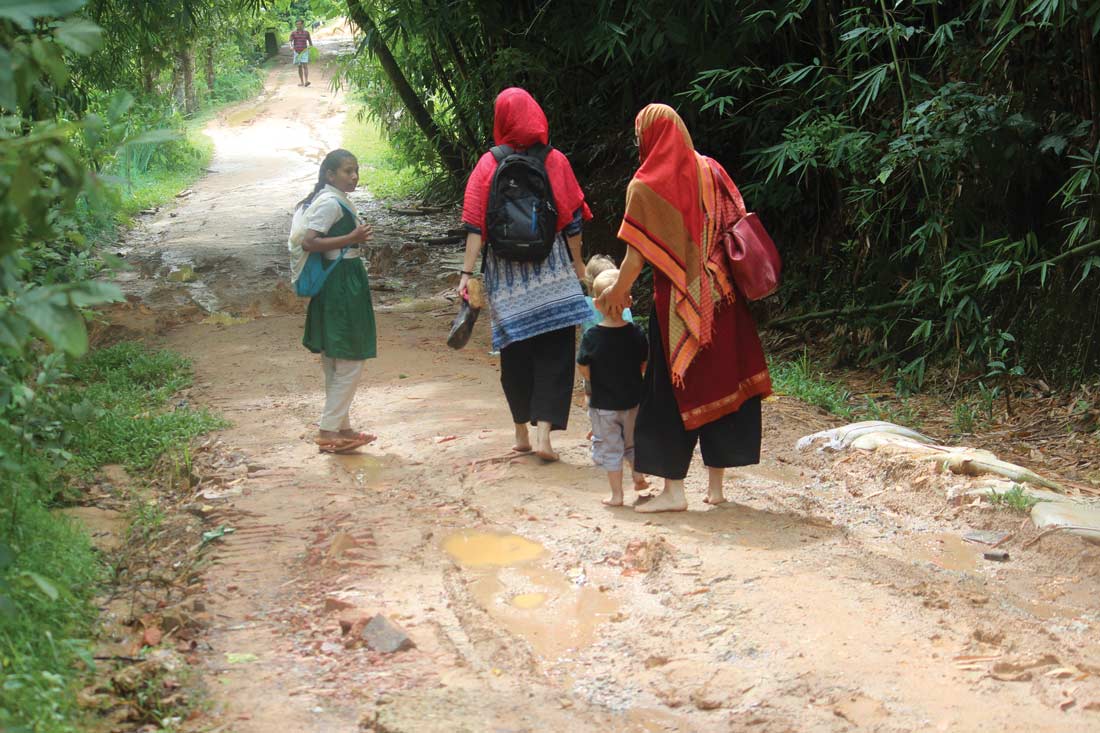 A muddy dirt track leads to a Rohingya family’s home, as members of a VMMissions worker family based in South Asia and others visit with them. These stateless people represent another vastly unevangelized people group. Courtesy photo

A muddy dirt track leads to a Rohingya family’s home, as members of a VMMissions worker family based in South Asia and others visit with them. These stateless people represent another vastly unevangelized people group. Courtesy photo

In recent years, VMMissions has placed greater priority on sending workers to unreached people groups. Thanks to the Lord of the harvest, dedicated and creative VMMissions workers are living incarnationally among some of the fifty largest unreached people groups in the world: the folk Buddhist Isaan of Thailand, the Sundanese in Indonesia, and the Turks. We have others working among Berbers, Uzbeks, and the largest unreached people group of all, Bengali Muslims. Each of these workers understands the joy of being aligned with God’s purpose for people of all cultures to add their voices to the chorus of the great multitude crying out, “Salvation belongs to our God, and to the Lamb” (Rev. 7:10).