Robert Mast, having served a lifetime with Virginia Conference and VMMissions, says of eastern Virginia, “We know that in the time of the early church, ministry began in Jerusalem. Later, Antioch became an important mission center. The Shenandoah Valley is the Jerusalem of Virginia Mennonite Conference. But, realize, Tidewater Virginia is our Antioch!” What made that particular context so special? How could one region spawn and support so many different ministries and church plants? How did VMMissions contribute to the picture, promoting greater faithfulness and fruitfulness?

In the final years of the 19th century, the word was out that cheap farmland was available in the Tidewater area of Virginia. Mennonite farmers came from as far away as Michigan, bringing with them a robust faith. It is said that one of the first men to migrate to the area got off the train, promptly went into the nearby woods, and knelt to pray.

Sarah Lapp, the beloved daughter of one of the first settlers became a missionary to India. While on furlough in 1908, her husband Mahlon preached at the dedication service of the Warwick River Church. It was partly through the influence of this passionate couple that a quarterly mission meeting was instituted in 1917. This laid the groundwork for cooperation with the mission board.

Records indicate that in 1924 the Warwick River Church sent each of the West Virginia preachers $17, equivalent to $250 today. By 1928, the congregation was bravely invested in mission work in the culturally diverse city that was quickly engulfing their rural enclave. In time and with the help of the mission board, this concerted energy resulted in the foundation of Huntington Avenue Church. 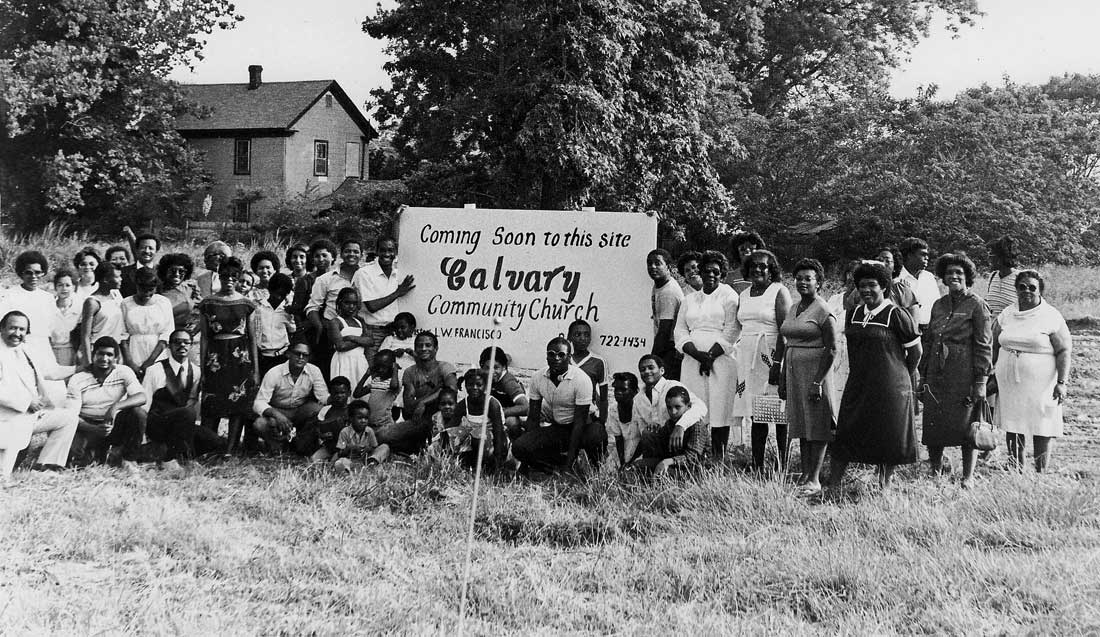 Warwick River Church was likewise ahead of its time in being open its African-American neighbors. With the support of both Warwick District and the mission board, Nelson Burkholder patiently built rapport with the African-American community in the 1940s. Local leadership eventually emerged with Bishop Leslie Francisco II, resulting in Calvary Community Church, the thriving congregation known today as C3 Hampton.

The list goes on. Warwick River had integral connections to other church plants in Williamsburg, Powhatan, and Richmond, and as far away as Kentucky, North Carolina, and Florida.

So what was it like in the early 1950s? Reflecting on his high school years in Warwick River, Sam Weaver shares, “I was a member of an octet singing group. On Monday nights we sang at the local jail, on Tuesday we had our church youth gathering called ‘Literary,’ on Wednesday we attended our church prayer meeting, on Thursday we sang at the local hospital, and on the weekend we had a social or sang at street meetings. And we went to church, morning and evening on Sunday! There was so much interest in revival and reaching out! We were busy! It was encouraging! We felt like we were important to the church.”

Lloyd and Sara Weaver, Sam’s parents, had moved to Newport News in 1948 at the request of mission board president Harold Eshleman, who was looking for someone to anchor ministry within the Jewish community following World War II. “My mother took our call to service seriously,” Sam recalls, “and so my father was willing to leave his thriving business in Lancaster.” The mission board purchased a home for the Weaver family right in the center of the Jewish section of Newport News. At first, the doors were open wide for evangelism. When two young men professed faith in Jesus, however, that particular door was closed. 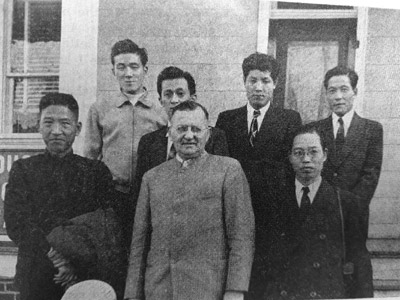 Lloyd Weaver, Sr., (center) ministered to Japanese military officers in Newport News. “Our non-resistance witness has been a great help in our work. […] Our Japanese friends remember the bombs that were dropped on Nagasaki and Hiroshima. We are thankful to prove to them by the Scriptures that Jesus’ program is one of peace, and that the Christian’s is no less.” – Lloyd and Sara Weaver

Still under assignment, God turned Lloyd and Sara’s attention to a new open door. “My father would eat at a coffee shop. One day, he saw an Asian man eating by himself, so he went over to talk with him and found out that this man was an officer on a Japanese ship. He had to stay in Newport News because of an injury. My father discovered that all of the officers could speak fluent English! So, in 1952 he and my mother started boarding the ships, developing relationships, writing letters and sharing the gospel.” Thus began the unique and fruitful ministry called “Church at Sea.” Sam recalls, “My dad counted 25 men who gave their lives to Christ in baptism during those years. My father would take these new converts to church and have them give their testimonies. One time he was preaching at Huntington Avenue Church and a Korean man came up afterwards to say, ‘Where did you learn to speak Korean? I heard you in the Korean language!’ It was just like Pentecost!”

Here was a door that stayed open for almost 30 years. Writes Harry Brunk in his history of the Virginia Mennonites, “Yes, a great work, but of a type and significance that the Virginia mission board and the Warwick River Church had not originally planned.” Such is often the case in mission.

Who would have been able to predict the trajectory of Bertha Brenneman’s life? She was a serious-minded girl in the serious-minded post-World War II era. She grew up in a poor family in Denbigh and sometimes felt a lack of acceptance from her peers. “I spent my last year of high school at Eastern Mennonite School. It was 1949, and I was 16. We had a weekly prayer meeting and were supposed to choose a topic to focus on. For some reason, I chose ‘rural Mennonite ministries.’ Someone shared about the work in Kentucky, stories about drunks breaking up church meetings! It sounded so different than anything I had ever experienced. Later, after graduation, a young man from Kentucky came to Denbigh to work. He seemed serious about his faith, like I was. I told him I would like to go to Kentucky sometime, so he told Mahlon Horst. I was invited to be a summer Bible School teacher. During that time I really felt blessed and fell in love with the people. I knew when Bible School was over I wanted to stay, but I thought, ‘Maybe I should do my nurses training first.’ I didn’t know what to do.”

“We feel so unable to give the witness that will make folks sick of sin and want to turn to Jesus. Please, Christian friends, remember us down here that we may be able to show people our Savior.”

Bertha traveled with an octet and after that time of service was over, Mahlon Blosser from the mission board came by and talked with her. Evidently, he sensed God’s call on her life. “We aren’t going to tell you what to do,” Mahlon said, “but if you get your training, the mission board wants you!” Bertha recalls, “It felt good to be wanted!” After her training, however, she was again at a crossroads. “My family seemed to need me. Perhaps I am meant to stay in Denbigh.” Again, Mahlon approached Bertha and asked, “Why don’t you go to Kentucky on a temporary basis?” That was 1955. Bertha didn’t return to Denbigh for 15 years. As she puts it, “It was in Kentucky that I discovered how God could use me.”

What can explain this blossoming of Bertha, and many others like her from Tidewater, the “Antioch” of Virginia Mennonites?” No doubt they would say, with the Apostle Paul, “I planted the seed, Apollos watered it, but God has been making it grow” (I Cor. 3:6).